Here are some shots of a job we did on a customer’s 12-string guitar that really highlighted what a 12-string can really be with the special care and attention that these beasts require.

It is common on 12-strings to see extremely high action. Over time the neck angle gets pulled out of alignment due to the enormous amount of tension on the neck. Action was at a whopping 11/64″ above the twelfth fret on the bass side and 5/32″ in the treble! Fortunately (unfortunately?) the guitar has a bolt on neck that is easily removed and shimmed. Sonically there are drawbacks to this type of neck joint on an acoustic but when it comes to resetting the neck this saved a lot of time and money. Action landed at 3/32″ in the bass and 5/64″ in the treble, well within a comfortable and playable range.

Often the 1/8” saddle typical of a 6-string acoustic guitar doesn’t actually provide enough room to properly intonate a 12-string. This saddle slot was not even cut in the right place, the ‘theoretical scale length’ landed behind the saddle on the treble side. So it’s no surprise we weren’t achieving proper intonation. On top of that the original saddle slot was somehow routed at a forward angle (interesting…) and the saddle itself was a poor fit, narrower than the slot which only added to the lean and it had been shimmed up quite a bit. Definitely not ideal, that’s a good number of critical aspects out of whack! 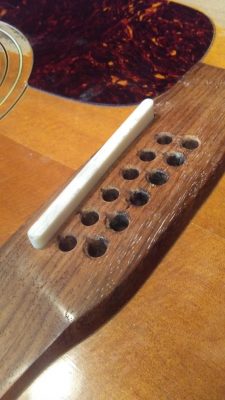 Intonation on a six-string is finicky enough and when you double up the strings like this you are more than doubling the work. The octave sets in particular pose a challenge, being so close together but needing to meet the saddle in very different places for proper intonation, but it makes an immense difference it to do this job properly, the string pairs stay in tune as you move up the neck, they sustain longer and clearer because, being in tune, they reinforce each other and that jangly wavering quality is much richer and more vibrant. 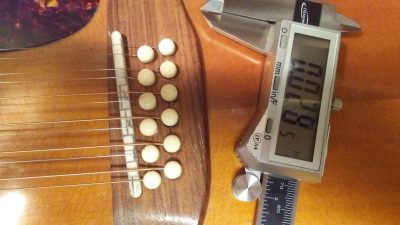 Fun with math! Using a strobe tuner, some number crunching, and my callipers we’ve now got the proper intonation points marked on the new saddle. 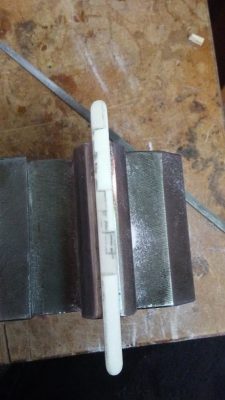 Material filed away so the strings meet the saddle in the right place. 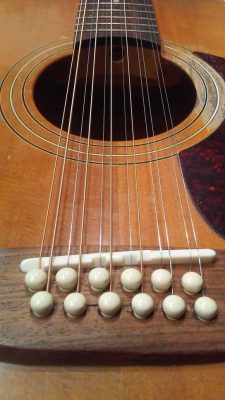 After much double and triple checking that the intonation is bang-on the saddle gets polished up. 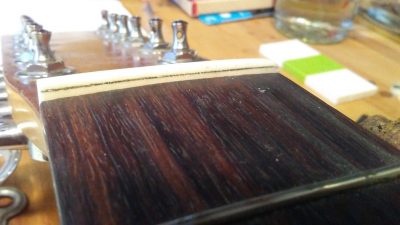 Again, doubling the strings more than doubles the work. Good string spacing makes for a way nicer playing experience. That is one of the suspects when a guitar just “doesn’t feel right” in your hand. On the 12-string you need to have, not only equal spacing between courses, but even spacing between each string in each pair. 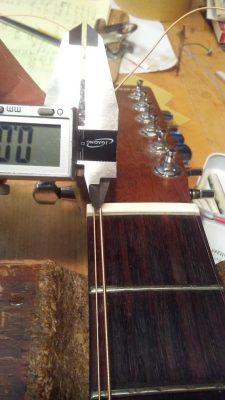 You don’t want the space within a pair to be too close or they will hit each other and create noise (though a bit of this, arguably, is a part of the “12-string sound”) And you certainly don’t want them so far apart that it is difficult to fret both strings at the same time. A distance of about .07″ is typical, I went a little further apart as we are stringing this with an ‘extra-light’ string gauge. 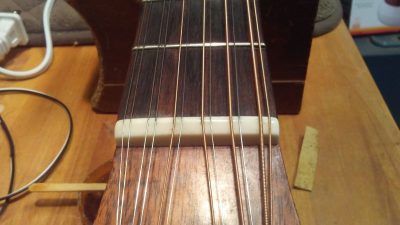 We always finish sand and polish the nut right up like we did with the saddle. 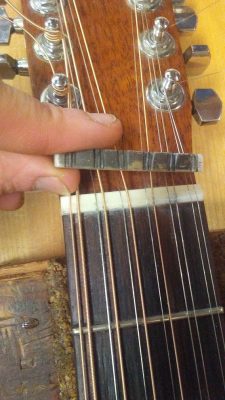 Compare with the original nut.

And the pay-off is equal to the effort. This guitar has many more years in it, it is playing like a different machine. We got the action from a whopping 5/32″ at the 12th fret down to a more reasonable 3/32″. Playing up the neck is far more comfortable now. The compensated saddle has not only made chords up and down the neck play consistently in tune, but the instrument’s voice is much richer, deeper, and bigger, as the string pairs are reinforcing each others harmonics, rather than clashing. There is still that nice ‘chorus-like’ waver, but it is smoother, more like a natural chorus than the warbley phase-cancellation created by an out of tune unison or octave.

All in all the customer was very happy, it is playing like a new or better-than-new instrument, and I’m feeling satisfied having overcome some new challenges and hearing and feeling the positive results.